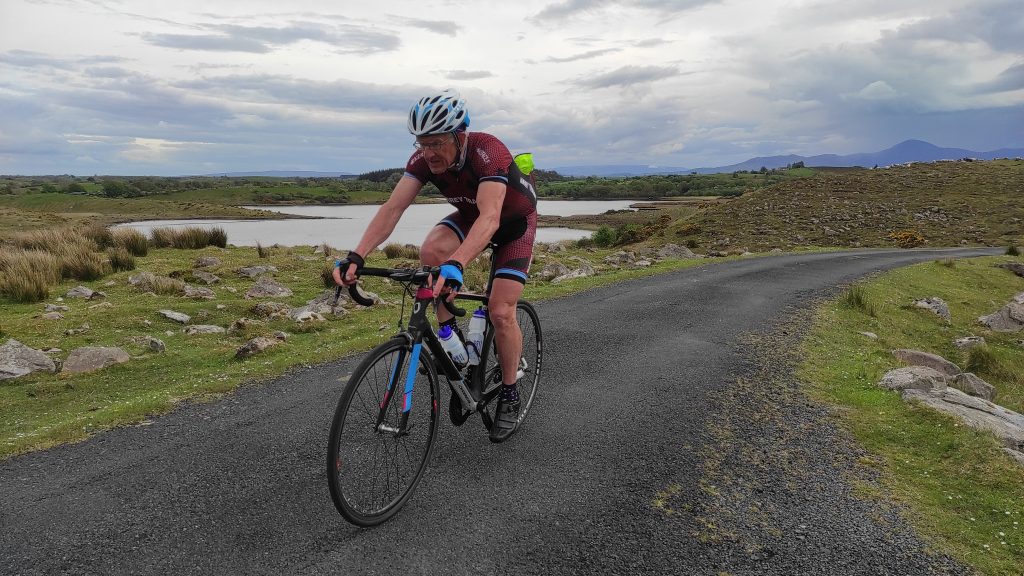 Herself said no, but then she relented when she learned that I planned to cycle “only 300k” and not the 650k Wild Mayo Ultra. There are those who reckon that Padraig Marrey looks at a geographical feature or route on a map and then without anyone even noticing, he will have it transformed into some epic type of torture, well he defiantly did that with the Wild Mayo Ultra routes. 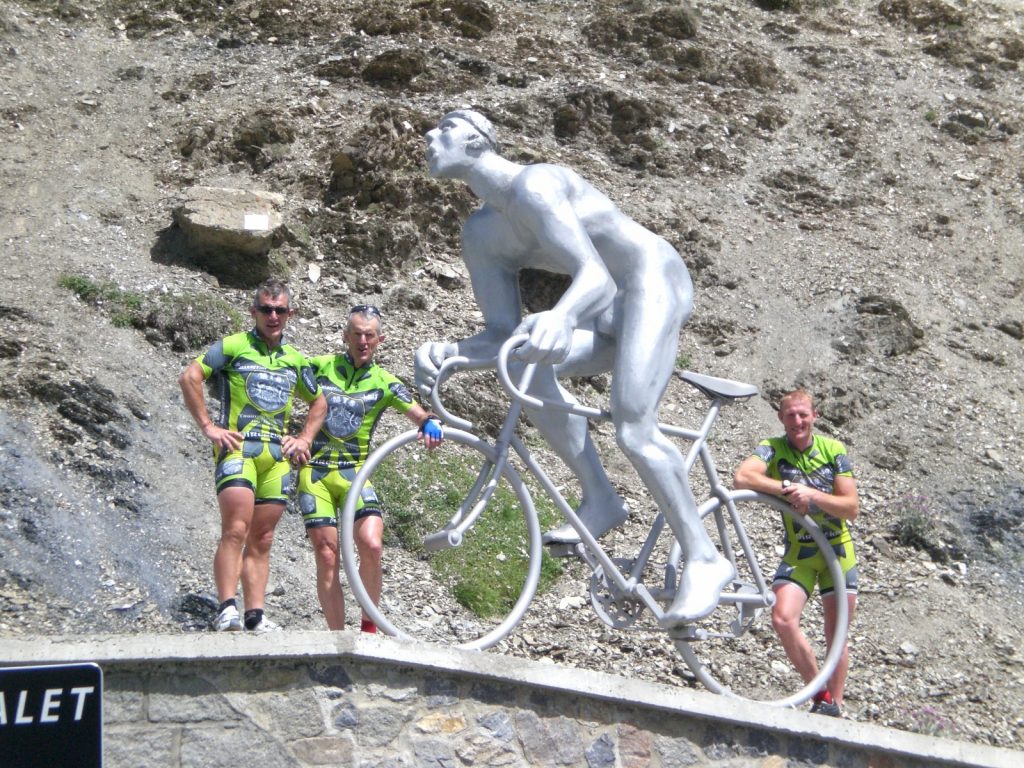 Noel Brady in the centre on the Tourmalet.

I have done a good bit of long distance riding over the years: Trans Pyrenees carrying luggage, multi trips in Spain, Portugal, and Italy, always over mountain ranges. A group of us did Mizen to Malin nonstop in 18:53hrs about 10 years ago.  We also were 2nd in the four person team in the Race around Ireland in the late noughties. I like the long hard stuff. I suppose what gave me the grá for trying an Ultra was last year when I had supported John Gilleran on his ride in the Donegal 555k. I figured that with the proper planning and support I’d be able for the Mayo Wild Ultra 300k. 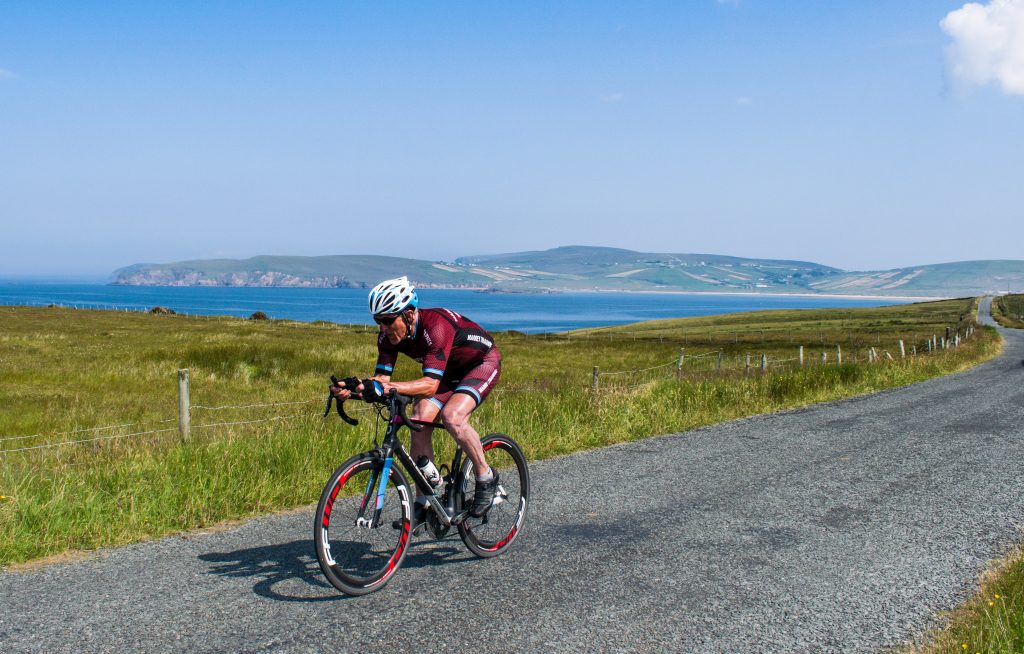 I knew from experience that training and building stamina are the keys to be able to last in long rides. As the saying going “I put the miles in”.  For the two months before the event I spent a lot of time on the bike– being retired is highly recommended (I’m recently retired after 40 years’ service with An Post). 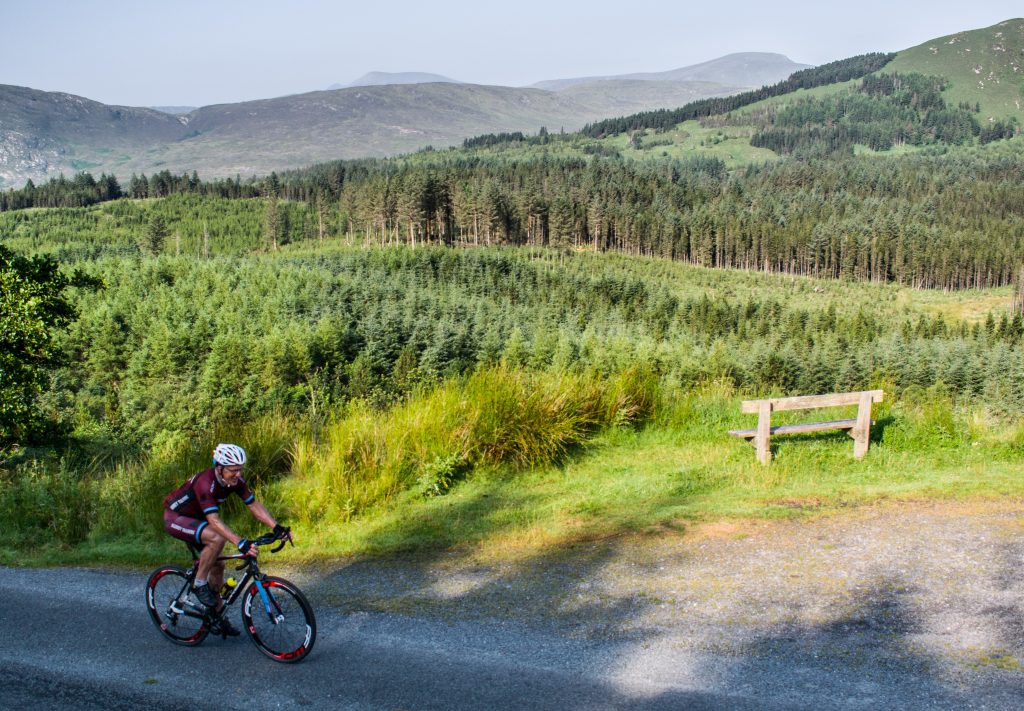 The other essential element for completing a long event is having a solid support team.  I was lucky having Kieran Mulchrone as my crew manager. He couldn’t have done more for me. In the lead up he dealt with the paperwork, organised spare bikes and wheels and generally saw the big picture. That left me free to plan my food for the day. I knew from experience that not having a nutrition plan can make or break you. From seeing the guys doing the Everest bid a few weeks back where they struggled to eat when the body was under extreme pressure, I knew you have to be able to get the calories in and that’s regardless of the food source. Otherwise the wheels will stop turning.

For the Ultra I prepared some pasta, baby potatoes with salt, porridge and fruit salad. Funny, the only food I enjoyed on the day was the fruit salad. For the bottles, I put some maple syrup and salt in, as I don’t like gels on a long ride. They upset my stomach.

Mike Flynn and Aidan Gill came on board as my support crew, Mike did the first 163k to Mulranny and then Aidan took over at the check in point for the rest of the event. I had warned them in advance that I might not be my usual calm and relaxed self, that a Prima Donna might emerge on the event as the day progressed. I wanted the stops to be slick, and they took this on board; they had the chair out, sunscreen at the ready using it as a massage oil and the spoon was stuck in the box of food. All I had to do was put it into my mouth! This type of preparation might sound a bit over the top, but every second saved while stopped meant that I optimised my time to the maximum. The lads were just marvellous; they took such great care of all the duties and all were done meticulously. They urged me on when I seemed to be slowing down and later on when the going got tough, they were right there with me, it was like they could feel my pain.

To say the day was a cracker is an understatement, I love cycling in the sunshine, that’s why I’ve been one of Ryanair’s best customers for the last decade. Riding through Furnace on event day morning reminded me of great days out in the South of Spain and on the Italian Alps. This 40k hilly section was magical as the sun rose, I got caught up in the feeling and pressed on hard completely forgetting I had another 260k to ride.  All my pacing plans for the day were thrown out the window. I was feeling strong, the bike was fast and I was reeling in competitors like no tomorrow. I was motoring all the way to Mullranny at 163k. I stopped there for a short while and then hit for Achill via the Corraun peninsula.  My body sent me a reminder, first I thought it was the headwind along the exposed coast that was causing me grief, but later I found that I was after burning all my matches. My heartrate would not respond to the yelling I was giving it to push on. I went from holding 145bpm to barely getting it above 120. The climb up Minaun was torturous but I had the gears to keep pedalling, using 36×36. The climb into Keem beach was a real struggle, as was the climb out.  I was cooked there, so stopped at the top to get some cold drinks and let me cool down a bit.

Notice the Heart rate drop from 180k on..

The last 65k of the Achill to Westport part of the challenge was well… challenging. I needed more frequent stops than I had planned and the cramping began to hurt badly. On one of the last climbs into Westport, (it usually doesn’t register as a climb or even a drag) just 8k from home the chain came off….literally. I cramped so badly I couldn’t get off the bike. My medical team came to my rescue with an unorthodox but very effective solution. Kieran stood over me asking (less than politely) that I open my mouth. He poured salt directly from the salt grinder into my mouth, followed by a can of coke. It worked amazingly well, the cramps eased and it was possible to get back on the bike. 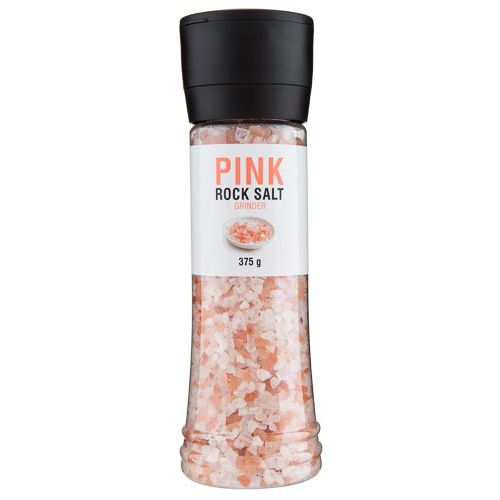 When I arrived at the finish at the Mariner hotel, Mill St. Padraig Marrey was there with a microphone and stuck it straight into my face for an interview. Is the man a sadist? However, he commented that I had lost two stone (a slight exaggeration) over the course of the day and that my legs looked like Sean Kelly’s but I politely reminded him that these were Noel Brady’s legs.  He left me alone then, while I sat quietly to one side to recover. Other than that slight misjudgement, Padraig and Bryan have created a terrific event. It ran like clockwork, from sign-on to finish.

What did I learn from the event? If you make a plan, stick to it, and don’t waiver from it. Use your heart rate monitor one hundred percent.  Drink more than you need and be very careful when the sun is shining and you feel fantastic as that’s when the wheels fall off. Kieran Mulchrone should be nominated for the Nobel Prize for Sports Medicine. Who knew a salt grinder held the answer to severe cramping? 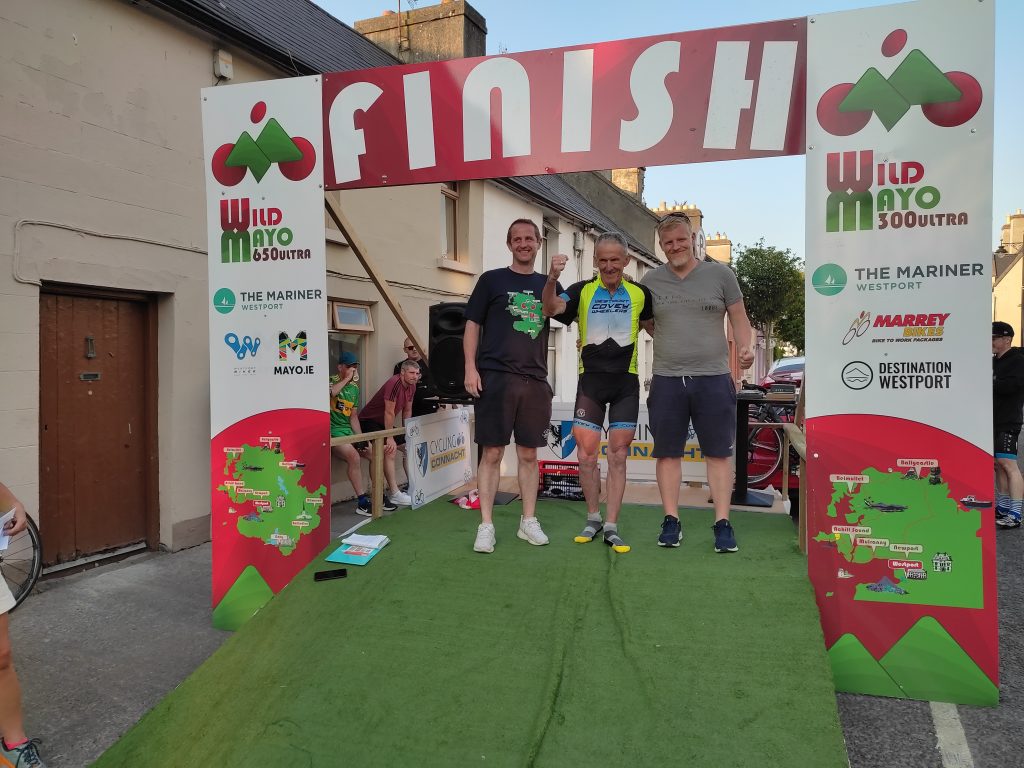 Saying all that, when i sign up to an event I tell myself I will give it everything and leave it all on the road.. I am more than happy to say that’s exactly what I did.. Till next year…