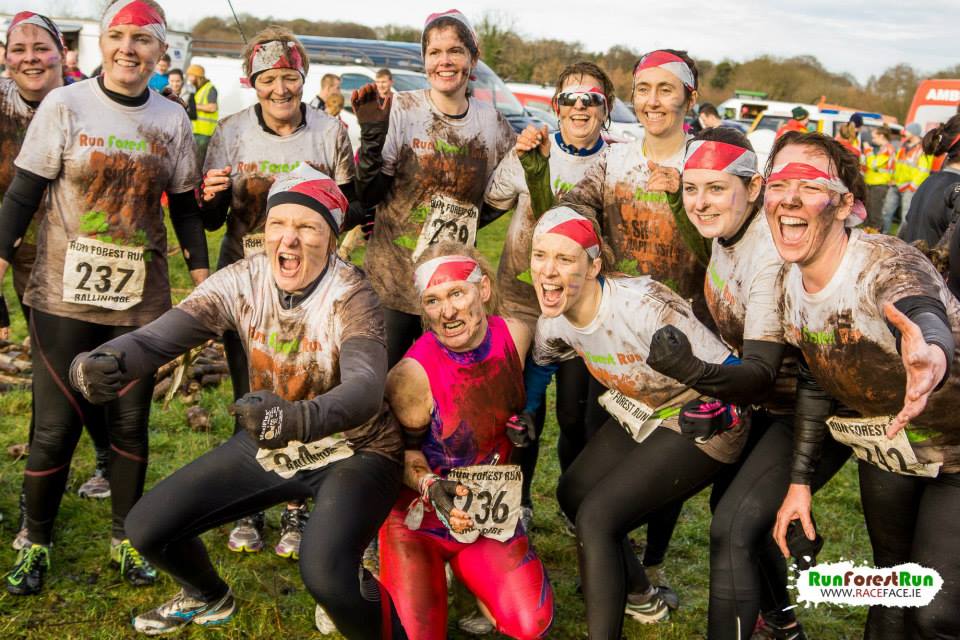 Things you can do in winter: Sit inside in front of a roaring fire? Maybe a brisk walk in the late winter sun? or how about stay in the warmth of your house while you write you letter to Santa? Well for the 200 plus lunatics who lined up for the inaugual “Run Forest Run” they had a completely different way of spending a winters Sunday morning.

On a glorious sunny Sunday morning in the depths of winter 200 plus lunatics travelled to Ballinrobe’s for the inaugural Run Forest Run event. While not knowing what lay in front of them the sight of the Corrib Mask Rescue launching their recovery boats into the River Robe must have sent a shiver down their spine (the first of many during the day). One might think it was going to be an easy stroll through the forest but it proved far more than that as participants had to navigate over, under, around, crawl and haul through many different types of terrain. It was not for the faint hearted.

The ultimate aim of the event was to push participants mentally and physically so that they got the most out of themselves and each other and a team while having as much fun as possible. While most entered as part of a 5 person team, individuals joined up and combined forces to haul tree roots, climb tire ladders, pull each other out of drains, push each other over bales, crawl through tunnels and to navigate their way out of a confusing maze in an effort to complete the course. Speed and time were not the important factors of this event as most were merely out to just enjoy the day and complete all the obstacles as best they could. The high volume of action photographers and various types of video equipment out on course served to capture participants efforts and laughter as they set about conquering the course. To add to the good nature of the event and to make it even harder loads of people suited up in fancy dress with fetching colours and costumes.

A few jail breakers were spotted running from the scene followed by a hungry crocodile at Crocodile Creek, a Godzilla was spotted swinging high up from tree to tree making what can only be described as manic noises, a luminous pink flamingo was out of her depth in the soft bog where her team, the Corrib Warriors came to the rescue to pull her out.

Participants were first “attacked” by the Ballinrobe Scouts who made their life hell when first firing water balloons, folowed by water guns before two “bully buckets” went on the offensive and launched attack after attack with buckets of cold mucky water on the unsuspecting runners. An APB has since been served and it wont be long before these two are captured and prosecuted to the full powers of the law.

A huge safety operation was put in place as the Corrib Mask lifeboat crew and Order of Malta to make sure everyone made it to the Finish line at the river Robe in one piece. The event charity is Movember and all local agencies will benefit from donations from the event proceeds.

On Sunday evening the Rose of Tralee came to Ballinrobe to turn on the Christmas lights, only the third town in Ireland she did this for, while the Run Forest Run survivors after party kicked off at Inch’s bar where video and camera footage showed to all what a great fun the event was.

The next event will be stage in Spring 2015 so look out for details on www.raceface.ie

All of the winners will have a tree planted with their name on a plaque at a ceremonial tree planting photo shoot, where in years to come they can visit their tree with their families at a special winners enclosure situated in the forest.