The Ireland West Duathlon series has proven a big hit with over 700 athletes participating in one or more rounds, a total of 183 athletes have taken part in more than 2 events which is  double the numbers of the 2016 series. IWDS athletes  showed well at the National Duathlon championships with quite a few in the medals proving how valuable the series is for conditioning.

The last round of the Bridge Signs sponsored series takes place in Westport this Saturday March 25th with a bumper field already signed up.

The Overall can be won potentially by 6 candidates, Former Galway Ras Rider Derek Joyce holds the lead by only 1pt, William Burke Galway Tri is right on his heels in second with Iron woman Lorraine Carey Liquid motion Ballina fresh from her Silver medal at the National only 7pts back in third. If any of the top 3 falter then Ray Mc Namara Liquid Motion, Paul Joyce Tri Lakes TC and Ciaran Kilcullen Ballaghdreen CC could well top the podium.

In the Ladies overall Lorraine Carey should have in sewn up baring a disaster, Mary Daly Multisport AM is in second and also leads the O40’s category, third is Jean O Connor Galway Tri with another Multisport AM in 4th Marie Halpin, 5th at the moment is Michelle Reynolds Liquid Motion but is closely followed by Susanne O Beirne Lough Key Tri and Erica Murray Yeats CC. 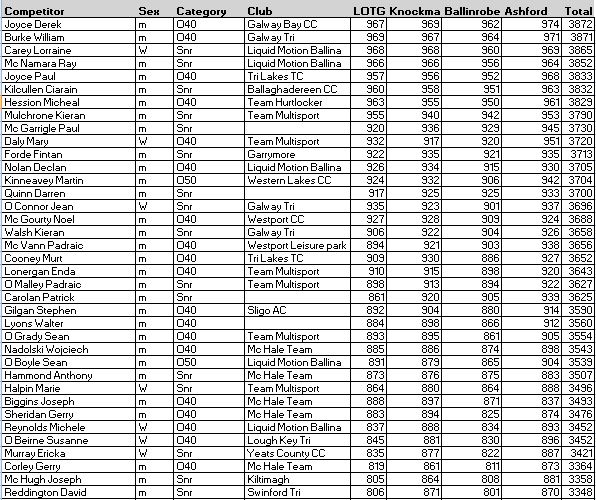 To spread the prizes out we will be given out Unplaced category prizes for the  Over 40 & O50In the Over 40 mens Un placed section Michael Hession Hurtlocker Galway, Declan Nolan Liquid Motion Ballina and Noel Mc Gourty Westport CC look to be podium contenders for the moment.

In the Ladies Michelle Reynolds and Susanne O Beirne get a second bite of the cherry providing they don’t make the top 5 overall, 3rd could be Carole King Multisport AM Westport. 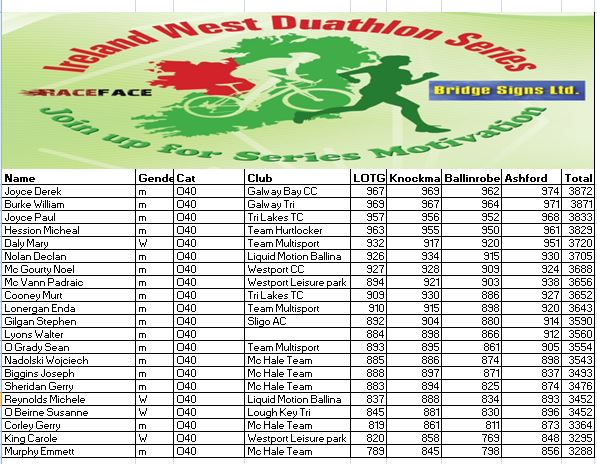 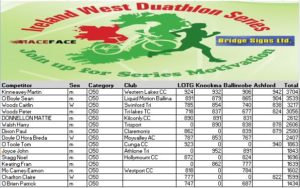 The Relay section has only one real contender at the moment that has completed 3 or more events and that is the Hollymount Wheelers duo of Michael Coleman Runner and biker Noel Jennings.

The Teams section is a very open affair with 4 teams in contention with Team Hurtlocker Galway holding a lead over locals Multisport AM with Liquid Motion Ballina third and Tri Lakes TC in fourth, all to play for hear and depending how the individuals score in will have a big impact on this category. 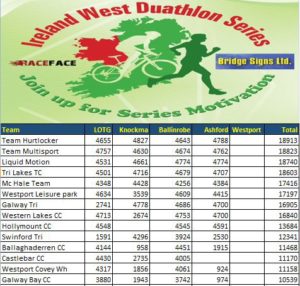