Saturday 24th July, I had the date marked in the calendar for about two months, once I had brought myself around to the idea of a 300km ride.  It sounded OK… I’d have a fair bit of training done and the weather would be decent.  Alas the weather wasn’t decent, it was brutal! 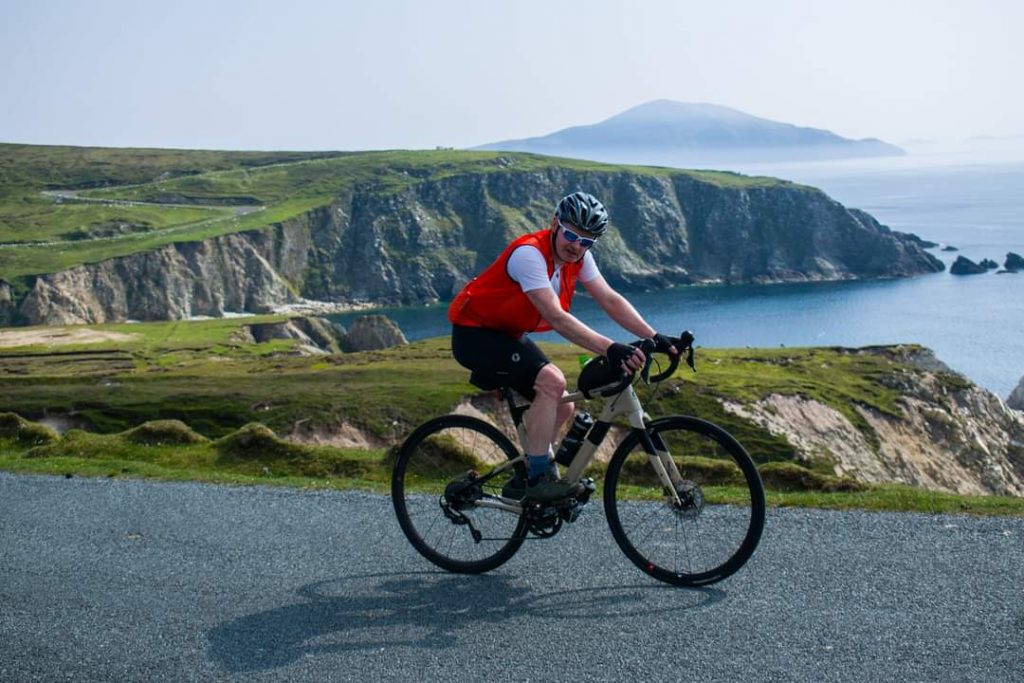 The Ultra was a new experience for me.  I’ve done a few 200km rides and did 250km last year when doing an Everesting.  I did the Mayo XTRM 200km off-road two weeks before the Ultra and did a 180km spin with the Swinford Ultra Cyclists on the Wednesday before the Ultra. That was a mistake as the heat was intense on that spin and I probably wasn’t fully recovered by the Saturday.  To be fair, it was one of a few mistakes I made and there’s little doubt that an event like this requires careful planning and preparation.

Registration and the bike check were perfectly straight forward and easy.  This is a niche event and the number of entrants were low, hence no queues of any sort.  As I live near Westport itself, it meant a simple spin in and out from town.  I had everything laid out the night before and made sure to check the Wahoo and power bank were fully charged.  On Saturday morning I checked everything to make sure it was good.  Just powered on the Wahoo to make sure it was still at 100% and had quite the panic to realise it had somehow dumped the entire battery overnight.  It hadn’t been left plugged in, and its never happened me previously, but there you go.  Got some power into it and plugged it into the power bank in the top tube bag.  I wasn’t sure it would charge fast enough, but it was absolutely fine. 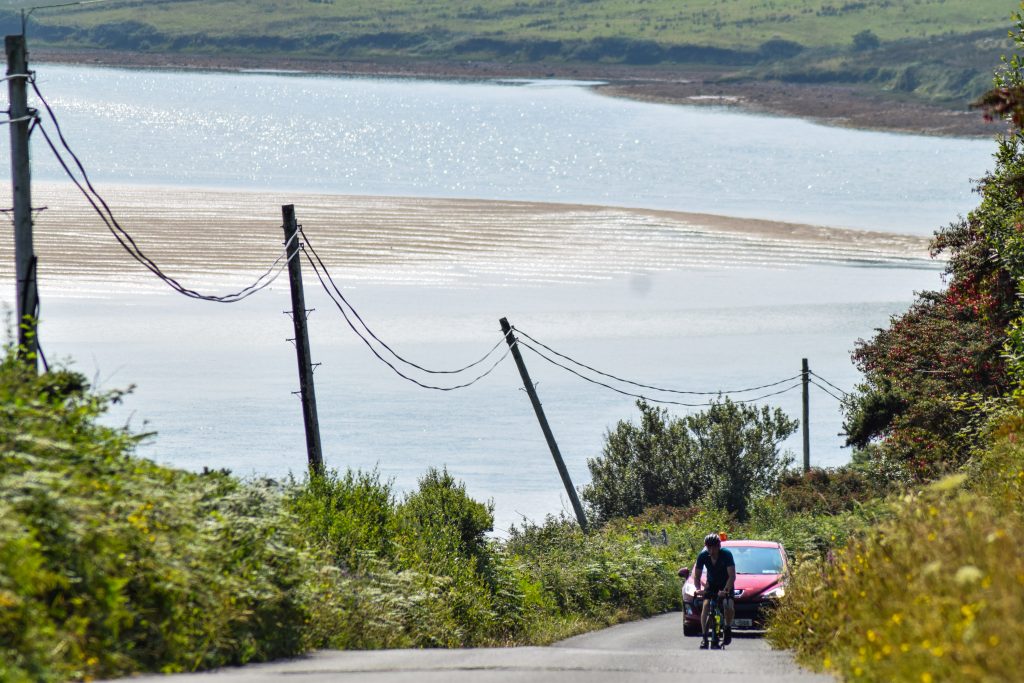 As I was riding unsupported, I had a rough food strategy that involved having some food with me and a couple of planned stops.  I stopped briefly in Crossmolina after 53km to top up on water and eat something, but had always planned on stopping for something more substantial in Barnatra after 120km, the Newport / Furnace part of the ride is stunning (as is the north Mayo coastline).  The climb out of Pullathomas, for example, is quite something and the vistas are just incredible. 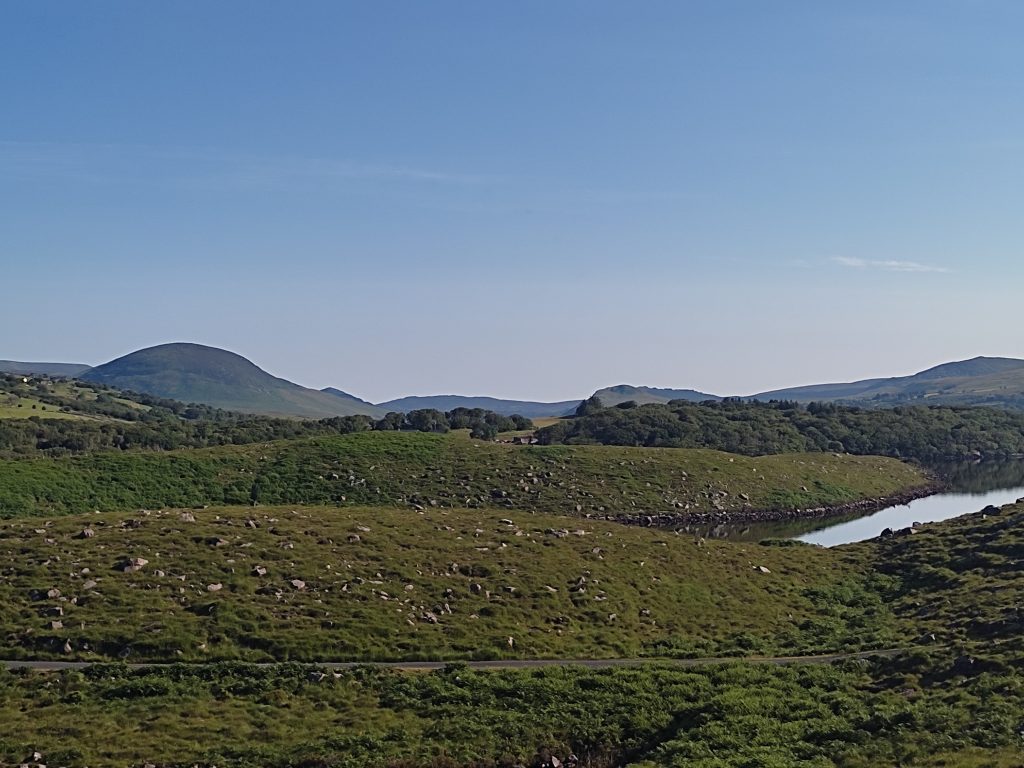 By the time I got to Barnatra I was feeling good, although I had planned eating a bit more food than I could manage.  I had a couple of pots of creamed rice which went down easily and were packed with sugar.  Although I felt good from Barnatra to Mulranny it was on that leg that my day started to unravel, slowly at first and then more substantially later on.

There were two key problems; 1) the heat and 2) saddle sores.  Anyone that knows me will understand my dislike of heat.  It’s just not my thing in any way.  It’s not the heat as such, but the fact that you need a greater intake of fluids and – looking back – I didn’t take near enough on board.  The heat on the day compounded the problem as no matter how much I drank I couldn’t seem to stay hydrated. The logical outcome was that by the end of the day I was cramping horribly.  The last 30km were grim and no matter what I drank seemed to make any difference.

I have never had a saddle sore until two weeks ago and cannot work out what has changed so drastically since then.  Three long spins and three extremely uncomfortable riding experiences in that time.  If you know, you know! I changed shorts during the day at mobile check point in Mulranny and over the course of the day applied chamois creams 4/5 times, but all to no avail.  Definitely a problem that needs sorting! 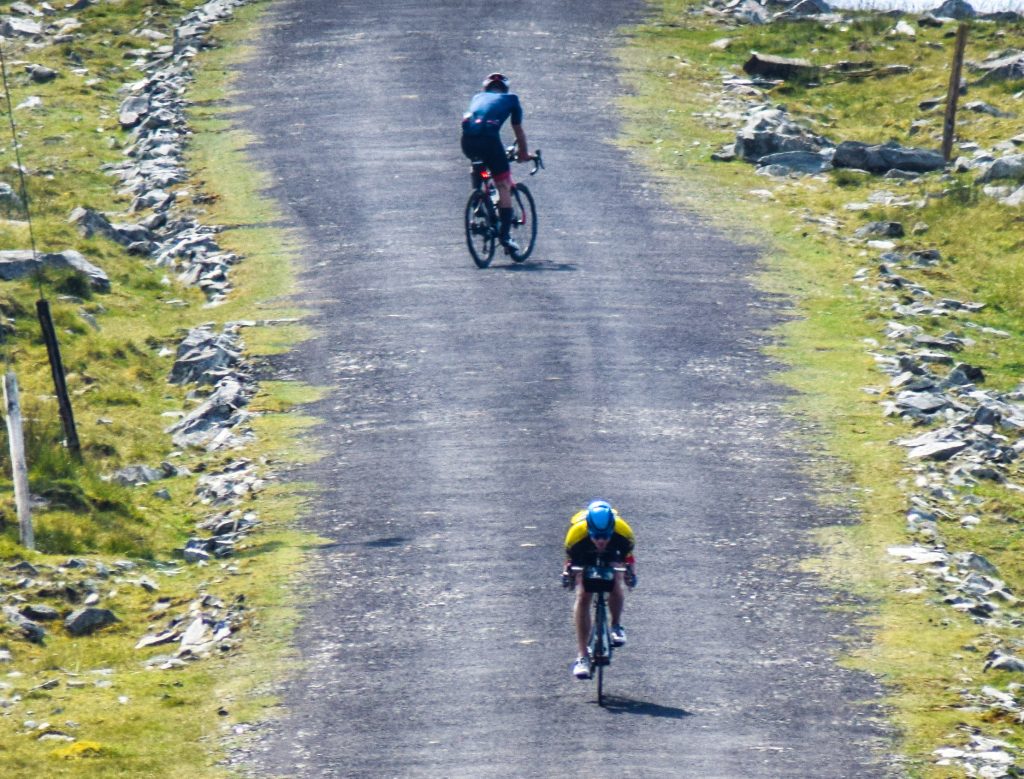 A rider struggles going up and another grabs the bars going down.. 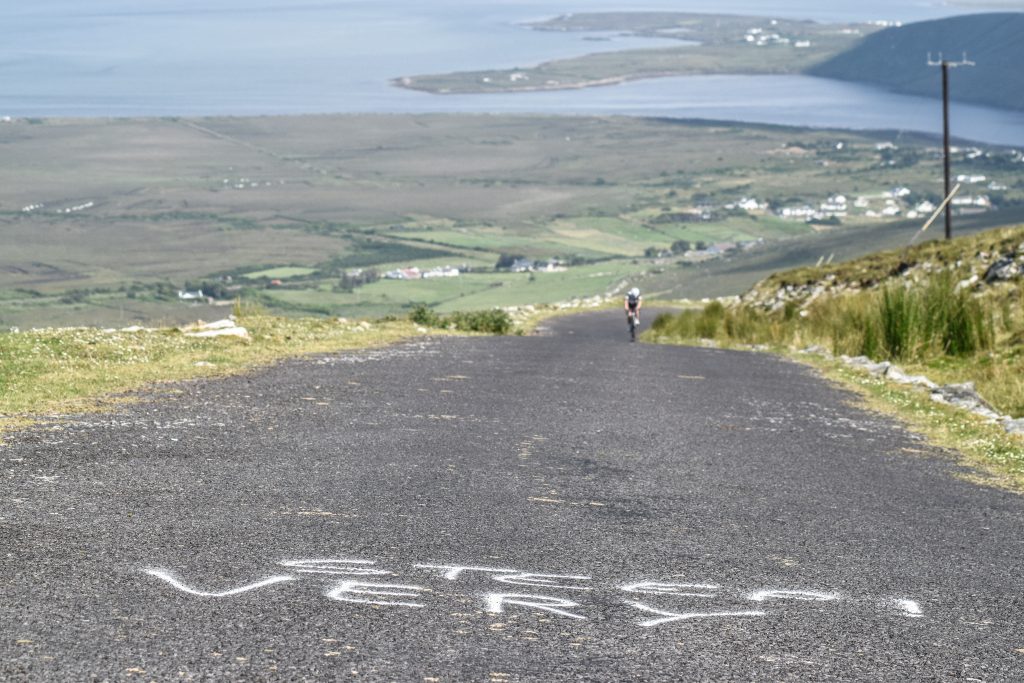 Steep is an understatement !!

The spin from Mulranny to the base of Minaun is again, spectacular.  There are no flat bits, its all rolling, but few roads in Ireland can match it.  There isn’t much that can be said about Minaun.  It truly is steep and unrelenting, especially in that heat. To be honest I pushed the bike part of the way up (Only a handful of riders were able to cycle up).  There wasn’t much by way of euphoria at the top as I was literally cooked at that stage.  The heat was savage.  A kind lady who was supporting another rider gave me a cold bottle and I was never so thankful.  The key thing about getting to the top of Minaun was that I knew the worst was over as I knew the road to Keem (Furtherest point West) very well.  By this stage, though, I couldn’t really eat much, apart from choc ices.  I was eating one outside Ted Lavelle’s when I spotted Noel Brady speeding back towards Achill Sound, and home.  I knew then that I was going to be a late finisher.  I probably ate about four choc ices over the afternoon, but when they’re all you CAN eat, then they’re better than nothing! 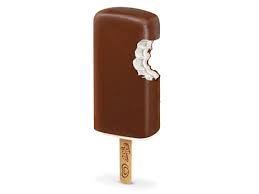 The climb out to Keem was a bit of a slog, but there is just something about that destination.  Regularly voted one of the top ten beaches in the world, it really is breathtaking.  As I was climbing back out of Keem (slowly) a guy walked alongside me for me bit.  He was from the Errigal club and said he had done the Donegal 555 a few weeks ago.  His advice was simple “just grind it out hey”.  To be fair, he was right. From there it was a relatively straight forward trek back to Westport.  I was slowing though, and was passed by another rider from Donegal who offered me some homemade flapjack as we passed through Mulranny.  Looking back now I can see that my split times were falling off the side of a mountain.  I lost a tonne of time on Achill, relative to other riders and I’m putting it down to the impact of the heat and an inability to get enough fluids into me.  I limped back into Westport in a time just north of 15 hours.  Padraig Marrey one of the organisers of the Mayo Ultra tried to ‘interview’ me at the finish line, but it was all picture, no sound at that point!

I hadn’t intended this to be an unrelentingly grim tale, but am just trying to give the perspective of a very average rider, suffering through a very hot day.  Would I do it again? Without a doubt! It’s highly unlikely we’ll get another day with such heat again, and I’d hope to trim my time back a nice bit next year.  I hear talk of an April date, so let’s see.

A big word of thanks to Bryan, Padraig and Mary for their work in getting the event off the ground.  Fair play guys! The three riders that did the 650km – kudos!! However, the real winner over the weekend was Mayo.  Never has it looked so utterly stunning, and it would be super to get more entrants next year from all over the country.  As for choc ices? I haven’t had one since. 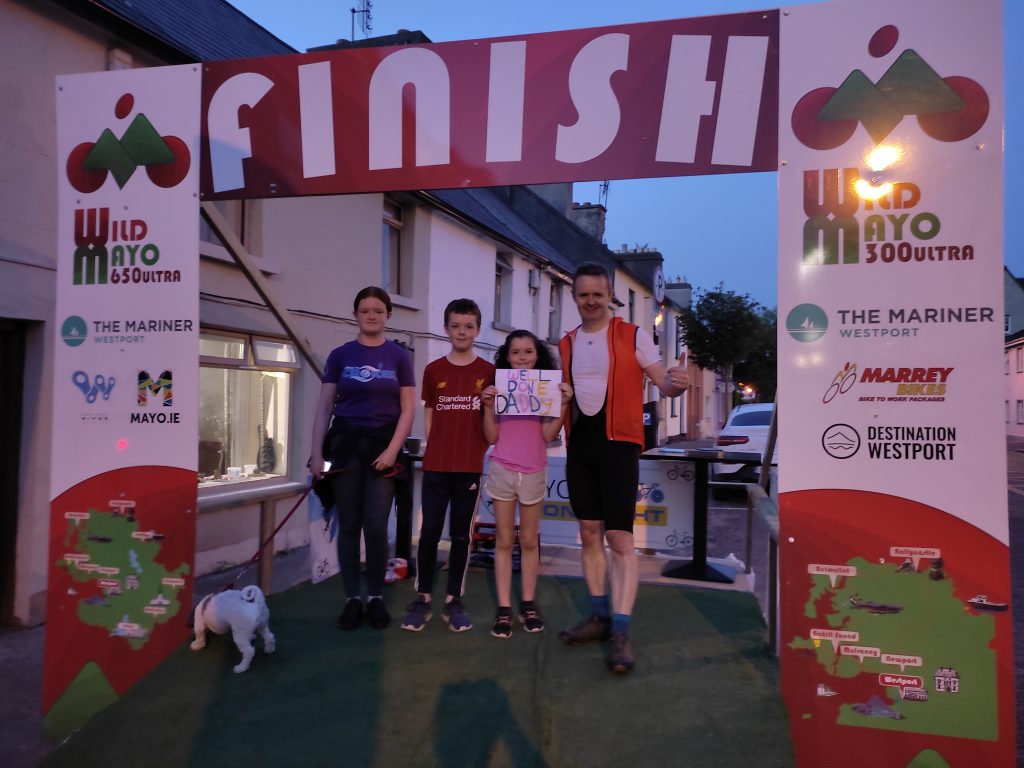