With the New Year only a few weeks away there will be plenty of enthusiasm to be part of the Bridge Signs sponsored series which will hold events in Claremorris, Knockma (Caherlistrane), Ballinrobe, Cong and Westport.

Bridge Signs of Ballinrobe are a sign, print and display company who are sponsoring the 2017 series,  Brian O’ Reilly company director says” The race organisers of this series have been loyal customers of ours for many years and it’s great to see the series going from strength to strength, I hope everyone enjoys the training and achieves their goals”. 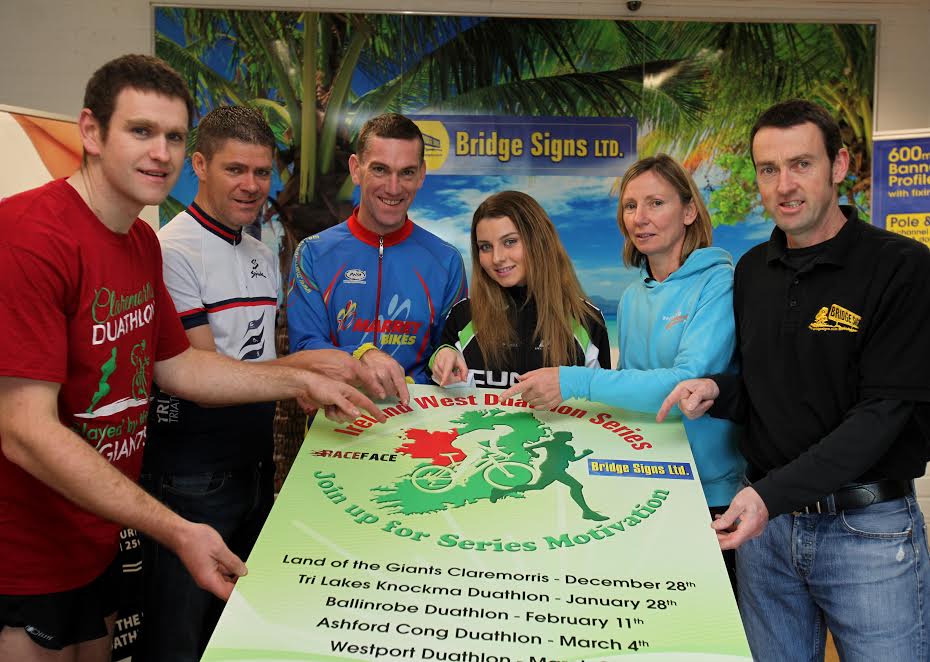 The series is spread over 3 months with each course offering new challenges for the competitors, the goal for most is to complete the course while improving fitness, for some its about keeping focused and working to a plan. The best part is participants will line up with other like minded individuals and this experience makes the series a very sociable and enjoyable experience for all.

Padraig Marrey of RaceFace and organizer of the series says “This is a great series to be part off, none of the events are very long and are easily achievable for most, the training is varied, one day can be running, the next it can be cycling. If the weather is bad you can use gym equipment so there are no real excuses for not training. Duathlon is a great sport as it involves running and cycling, to be good at it you have to be an all-round athlete, the crossover in fitness for the likes of Triathlon or Adventure racing is incredible and there are huge gains to be made in other sports as well”.

This Series is unique to the West of Ireland and over the Winter/Spring months it will be a great way to keep fit while measuring your progress from event to event, the few weeks between events allows amble time to train on your weak areas so that there is no burnout from over competing.

The first event of the 5 race series is the Land of the Giants Duathlon Claremorris on December 28th, then its the Tri Lakes Knockma Duathlon, then Caherlistrane is on January 28th, and after that theBallinrobe Duathlon in February 11th, followed by the Ashford Cong Duathlon is on March 4th with the last round will be held in Westport on March 25th , its sure to be a climatic finish.

Each event will have its own separate prize fund, the Bridge Signs Series will have a prize fund for the overall winner based on participants best 5 results from the events. We will also have a most improved Male and Female competition, in addition to the usual category prizes.

Last year we have enthusiastic involvement from the corporate sector and this year we hope to build on that success with a company trophy which will be unique to our series.

In 2016 Multisport Westport won the team prize, this year we expect a titanic battle for the perpetual cup as a whole host of new fitness groups aim for the title, fitness trainers and gym instructors will have to be on their toes with latest training regimes.

To cater for both codes we also have a relay section (Runner/Biker).

Check www.raceface.ie or www.runireland.com for entry details, each event also has its own Facebook page.

Sign up for the full series at Marrey Bikes Ballinrobe or at the Leisure Park Westport and receive a special discount but only in the months of November and December.

See you at the start line!

Posted in News
Scroll To Top